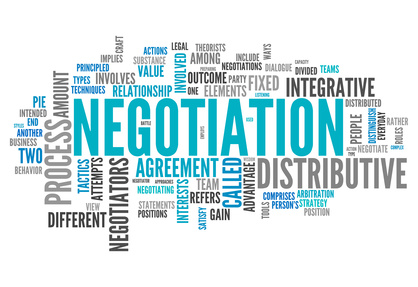 Negotiation is a dialogue between two or more people or parties intended to reach a mutually beneficial outcome, resolve points of difference, to gain advantage for an individual or collective, or to craft outcomes to satisfy various interests.

Negotiation occurs in business, non-profit organizations, and government branches, legal proceedings, among nations and in personal situations such as marriage, divorce, parenting, and everyday life. The study of the subject is called negotiation theory. Professional negotiators are often specialized, such as union negotiators, leverage buyout negotiators, peace negotiators, hostage negotiators, or may work under other titles, such as diplomats, legislators or brokers.

In any disagreement, individuals understandably aim to achieve the best possible outcome for their position (or perhaps an organization they represent). However, the principles of fairness, seeking mutual benefit and maintaining a relationship are the keys to a successful outcome.

It is inevitable that, from time-to-time, conflict and disagreement will arise as the differing needs, wants, aims and beliefs of people are brought together.  Without negotiation, such conflicts may lead to argument and resentment resulting in one or all of the parties feeling dissatisfied. The point of negotiation is to try to reach agreements without causing future barriers to communications.

Preparing for a Successful Negotiation

Depending on the scale of the disagreement, some preparation may be appropriate for conducting a successful negotiation.

For small disagreements, excessive preparation can be counter-productive because it takes time that is better used elsewhere. It can also be seen as manipulative because, just as it strengthens your position, it can weaken the other person’s.

However, if you need to resolve a major disagreement, then make sure you prepare thoroughly. Using our free worksheet, think through the following points before you start negotiating:

Goals: what do you want to get out of the negotiation? What do you think the other person wants?

Expected outcomes: what outcome will people be expecting from this negotiation? What has the outcome been in the past, and what precedents have been set?

Power: who has what power in the relationship? Who controls resources? Who stands to lose the most if agreement isn’t reached? What power does the other person have to deliver what you hope for?

Possible solutions: based on all of the considerations, what possible compromises might there be? 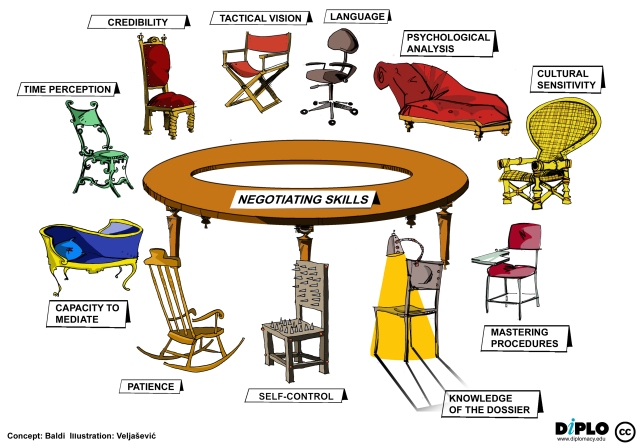 Effective negotiators must have the skills to analyze a problem to determine the interests of each party in the negotiation. A detailed problem analysis identifies the issue, the interested parties and the outcome goals. For example, in an employer and employee contract negotiation, the problem or area where the parties disagree may be in salary or benefits. Identifying the issues for both sides can help to find a compromise for all parties.

Before entering a bargaining meeting, the skilled negotiator prepares for the meeting. Preparation includes determining goals, areas for trade and alternatives to the stated goals. In addition, negotiators study the history of the relationship between the two parties and past negotiations to find areas of agreement and common goals. Past precedents and outcomes can set the tone for current negotiations.

It is vital that a negotiator have the ability to keep his emotions in check during the negotiation. While a negotiation on contentious issues can be frustrating, allowing emotions to take control during the meeting can lead to unfavorable results. For example, a manager frustrated with the lack of progress during a salary negotiation may concede more than is acceptable to the organization in an attempt to end the frustration. On the other hand, employees negotiating a pay raise may become too emotionally involved to accept a compromise with management and take an all or nothing approach, which breaks down the communication between the two parties.

Negotiation is not necessarily a one side against another arrangement. Effective negotiators must have the skills to work together as a team and foster a collaborative atmosphere during negotiations. Those involved in a negotiation on both sides of the issue must work together to reach an agreeable solution.

Individuals with negotiation skills have the ability to seek a variety of solutions to problems. Instead of focusing on his ultimate goal for the negotiation, the individual with skills can focus on solving the problem, which may be a breakdown in communication, to benefit both sides of the issue.

Leaders with negotiation skills have the ability to act decisively during a negotiation. It may be necessary during a bargaining arrangement to agree to a compromise quickly to end a stalemate.

Effective negotiators have the interpersonal skills to maintain a good working relationship with those involved in the negotiation. Negotiators with patience and the ability to persuade others without using manipulation can maintain a positive atmosphere during a difficult negotiation.

Ethical standards and reliability in an effective negotiator promote a trusting environment for negotiations. Both sides in a negotiation must trust that the other party will follow through on promises and agreements. A negotiator must have the skills to execute on his promises after bargaining ends. 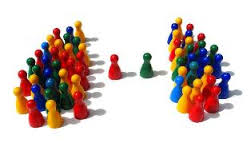 Being assertive means asking for what you want and refusing to take NO for an answer. Practice expressing your feelings without anxiety or anger. Let people know what you want in a non-threatening way. Practice ‘I’ statements. For example, instead of saying, “You shouldn’t do that,” try substituting, “I don’t feel comfortable when you do that.”

“Challenge” means not taking things at face value. It means thinking for you. You must be able to make up your own mind; as opposed to believing everything you are told. On a practical level, this means you have the right to question the asking price of that new car. It also means you have an obligation to question everything you read in the newspaper or hear on CNN. You cannot negotiate unless you are willing to challenge the validity of the opposing position.

Many conflicts can be resolved easily if we learn how to listen. The catch is that listening is the forgotten art. We are so busy making sure that people hear what we have to say that we forget to listen.

‘GETTING MORE’ by STUART DIAMOND; 12 principles for effective negotiation 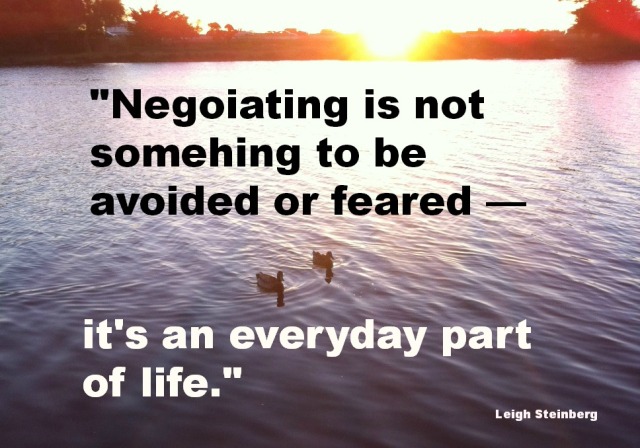 BEST PRACTICES: NEGOTIATING – WHAT’S THE POINT OF THE DEAL, REALLY?

When business is tough, deal negotiators are often under tremendous pressure to deliver the goods. Yet it is precisely during such times that focusing on the quality of deals can be most critical. This means going beyond the deal, negotiating as if implementation matters.

Negotiating as if implementation matters is quite different from just “doing deals” for the sake of reaching agreements. It means doing some things that go against common wisdom. These things include the six steps below.

Often this means working backwards from what it is you are hoping to accomplish, to determine what it is you really need your counterpart to help you do. Understanding what you and they need to do differently after the deal is signed will help inform how you should negotiate.

Typically, this requires consulting more, rather than less, broadly speaking. When implementation matters, you need to involve more stakeholders, on your side and theirs, than might be strictly necessary to reach agreement. Leaving the implementers out of the negotiation makes it more likely that they will be unwilling or unable to live up to commitments made on their behalf.

Whether we like it or not, the negotiation is the first, best example we have of what it is like to work together. We can use that opportunity to create a useful history of collaboration and problem solving, or we can waste it by posturing, withholding information, springing surprises, coercing, and damaging trust.

It is easy to bury your head in the sand and avoid raising difficult topics during the negotiation. After all, you don’t want to give offense, and besides, those problems “might not happen.” But ignoring risk doesn’t make it less risky. Addressing it jointly, however, gives us more opportunities to prevent potential problems or to mitigate their impact.

Some negotiators measure success by the number of commitments they can extract from their counterparts. But commitments they can’t deliver on are hardly worth the paper they are written on. Relying on enforcing penalties in the contract later doesn’t get you a successful event when you need it.

The deal is not done when it’s signed. Use what you learned at the table to propel you and your team right to successful execution. A fast lap in a relay race is useless if you drop the baton instead of handing it off smoothly. If there needs to be hand-off to others who have to take what was negotiated and act on it, don’t leave it to chance. Make sure the hand-off happens, that both sides are involved, and that it covers not only the words but the intent of the agreement.

Doing these things is hard. It runs counter to a lot of incentives that have been built into the jobs of some negotiators. It flies in the face of many things our culture teaches us about deal making. It requires some different skills, and it may cost you some deals that you might have closed if you had disregarded this advice. But if you have something worth negotiating, and if implementation matters, then doing deals any other way is just plain irresponsible and foolish.

18 Responses to What is Negotiation?