Lionel Messi has scored 13 goals in 26 matches at the football World Cup. He scored seven goals at Qatar 2022. 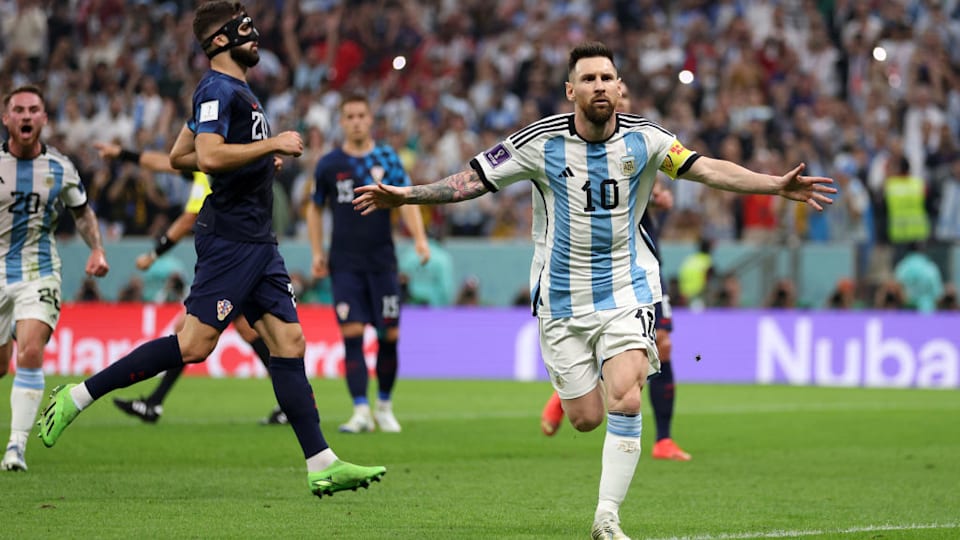 With over 750 senior goals for club and country, Lionel Messi’s credentials as one of the greatest goal scorers in football history are beyond any doubt.

However, the Argentinian master had struggled to live up to these lofty standards on the FIFA World Cup stage until an incredible showing Qatar 2022, which helped Argentina to their third world title.

The stats put Leo Messi’s scoring rate at football World Cups at 0.50 goals per game. Though an impressive number, it is lower than the 0.56 goals per game he boasts in his international outings with Argentina.

Lionel Messi has netted 98 goals in 172 international matches in his career, making him the top goal scorer of all time for Argentina. Messi is also third on the list of highest goal scorers in international football and second amongst active players, only behind rival Cristiano Ronaldo.

At the World Cups, Messi features a little lower down the list. Germany’s Miroslav Klose (16 goals from 24 matches) is the highest scorer at the quadrennial meet.

Lionel Messi came at the FIFA World Cup 2022 at the age of 35 and improved his World Cup goal-scoring record considerably in Qatar.

Here’s a look at the Argentinian icon’s goals at the FIFA World Cup.

Lionel Messi scored his first goal in the football World Cup at the 2006 FIFA World Cup in Germany against Serbia and Montenegro in Argentina’s second Group C clash at the FIFA World Cup Stadium in Hamburg.

After witnessing his team beat Ivory Coast 2-1 in their group opener from the bench, Lionel Messi made his World Cup debut against Serbia and Montenegro in the following fixture after coming off the bench in the 75th minute.

Argentina were already leading 3-0 at the time and just three minutes into his debut, Lionel Messi assisted Hernan Crespo for Argentina’s fourth goal of the match. In the 88th minute, Messi got on the scoresheet after latching onto a Carlos Tevez pass and beating the opposition goalkeeper at the near post to complete a 6-0 drubbing.

With his maiden goal at the global showpiece, Lionel Messi, then 18 years and 357 days old, became Argentina’s youngest scorer at the FIFA World Cup.

Argentina coach Jose Pekerman handed Lionel Messi his first FIFA World Cup start in a 0-0 draw against the Netherlands and the teenager also made a substitute appearance as Argentina beat Mexico 2-1 in the round of 16. He, however, was an unused substitute as Germany knocked Argentina out through penalties in the quarter-final.

Unlike the 2006 World Cup, where he came in as an up-and-coming teenager, Lionel Messi had the burden of expectations stacked on him for the 2010 FIFA World Cup held in South Africa.

Leo Messi had, after all, set the bar high following his exploits with Barcelona and guiding Argentina to the Olympic gold medal at Beijing 2008. However, the script didn’t quite play out as planned for the Argentinian maestro.

Argentina made it to the quarters again before being ousted by Germany but Messi, despite contributing heavily to the team throughout, remained goalless in his five matches. His only goal contribution at the edition was an assist to Carlos Tevez during Argentina’s 3-1 win over Mexico in the round of 16.

After the 2010 campaign, Lionel Messi had a lot to prove by the time the FIFA World Cup 2014 in Brazil rolled in. This time, the little maestro took the tournament by the scruff of the neck.

Lionel Messi, with four goals and one assist in seven matches, almost single-handedly dragged Argentina to the final but eventually, Messi and Co. fell short after Germany, again, beat them 1-0 in the final.

Two of his goals came in a 3-2 win over Nigeria in a group match. It’s the only time Lionel Messi has scored more than one goal in a single FIFA World Cup match.

Besides being the top scorer for his team in the 2014 World Cup, Lionel Messi was adjudged the best player of the tournament and won the Golden Ball award.

The FIFA World Cup 2018 in Russia saw Argentina knocked out in the round of 16 by eventual champions France.

Lionel Messi, despite missing a potential match-winning penalty against Iceland in Argentina’s first game, however, was the standout player for Argentina in what was otherwise a disappointing campaign for the South Americans.

Messi’s only goal in the tournament came in the final group match against Nigeria, setting the tone for a 2-1 win. It was a virtual playoff game for both sides to make it to the knockouts.

With his goal against Nigeria in the 2018 edition, Messi, interestingly, became the first player in history to score in the FIFA World Cup in his teens, twenties and thirties.

Even during the 4-3 loss to France in the final-eight clash, Messi was the one who kept Argentina’s hopes alive right till the end, assisting two of his team’s three goals.

Lionel Messi, 35, came into the FIFA World Cup 2022 in Qatar with a lot of expectations and delivered brilliantly, scoring seven goals in as many matches. He fell one short of Kylian Mbappe’s tally and missed out on the Golden Boot, but it was enough to win Argentina a historic third World Cup title after 36 years.

Two of his goals came in the final vs France and the tournament saw Messi score in each of the four knockout rounds – previously unprecedented in the FIFA World Cup.